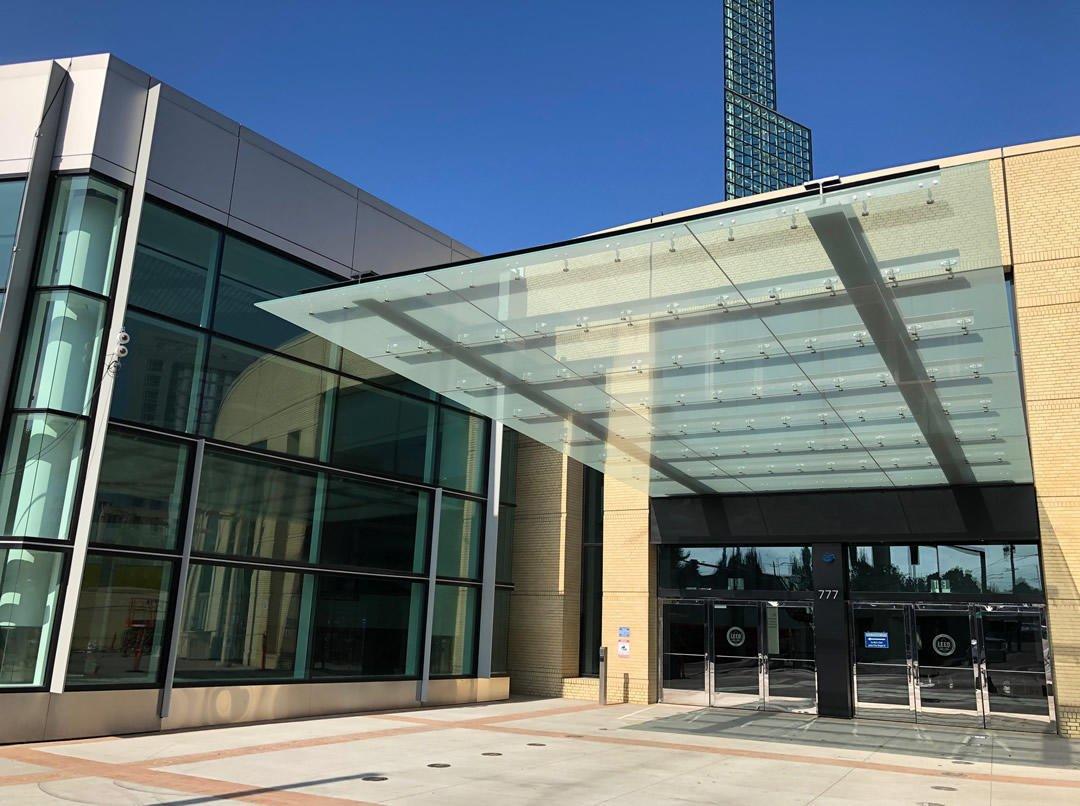 A significant renovation of the Oregon Convention Center is getting ready to wrap up.

Since the $39 million project began approximately one year ago, Colas Construction has finished two phases of work, which included pre-function areas of the A and B concourses at the north end of the building. The third phase, a transformation of the Oregon Ballroom and an associated pre-event area, is down to the last few items.

Initially completed in 1990, the convention center underwent an expansion in 2003. Its overall look, however, hasn't changed drastically - until now. The current renovation is designed to bring the interior and exterior of the building, from wall treatments to signage, into the 21st century.

"Our goal is to create a sense of place," Craig Stroud, executive director of the convention center, said.

Throughout the building, new carpet has been installed that features patches of color emulating blooms of algae and lichen in a forested area. Textured wall treatments with elements that resemble tree trunks and limbs add to the features that reflect the nature of Oregon.

The theme is carried through to the 25,000-square-foot ballroom and a nearby pre-event area.

In the pre-event area, a series of perpendicular slats run across the ceiling. The result is a topographically accurate representation of the Cascade Mountain range, with the rim of Crater Lake at one end and Mount Hood at the other.

The ballroom's ceiling also boasts a unique treatment featuring geometric grids in various sizes arranged to create a sense of gazing up through a forest canopy. The lightweight pieces look like real wood but are composite foam and recycled plastic. The simulated wood surfaces match natural wood paneling around the room's main doorways.

Because sprinklers, audiovisual equipment and other systems are installed in the ceiling along with the treatment, placement of the gridded pieces was one of the most complicated parts of the ballroom renovation, according to Colas.

Each piece is suspended from the ceiling by steel cables. With more than 1,000 pieces to be placed, the project team came up with a system to make sure each was situated correctly. The bare concrete floor beneath each section was marked with different colors of spray paint: blue, pink, green, orange. Subcontractors used the markings to identify the size and orientation of each ceiling section.

The gridded pieces were then attached and hoisted to their final positions. The paint marks on the floor later were covered with new carpeting.

As part of the renovation, the room was engineered for maximum sound absorption. While the ceiling treatment provides some of that absorption, additional baffling also has been added to the walls. The ballroom's sound system has been upgraded and a heavy steel beam, hidden by the ceiling treatment, has been installed to support a new rigging system.

"There's a lot of technology (up in the ceiling) that you can't see right now," Stroud said.

As the three phases of interior work have moved forward, crews have been busy tackling exterior improvements of the convention center building and grounds

Workers recently put finishing touches on the installation of a new glass canopy over an entrance on Martin Luther King Jr. Boulevard. A new main sign also will be installed.

An update to the plaza at the north end of the building will feature an amphitheater-like area, including seat steps, that will provide space for outdoor concerts, receptions and other events. New signage and the layout of the plaza are designed to create more apparent paths of travel for people moving between the convention center and the new Hyatt Regency Hotel under construction nearby.

The interior and exterior work is all on track to be finished by the beginning of October. The first event in the renovated ballroom will be held on Oct. 9.

Having Colas Construction on board as the general contractor hasn't just helped keep the project on track, according to Stroud. Colas also set a new standard for how public projects can incorporate diversity with regard to contracting and workforce.

Metro, which owns the convention center, set a goal for COBID-certified firm involvement at 30%. The state designation is used to identify firms that meet specific criteria as minority-, woman- and disabled-service-veteran or as emerging small businesses.

However, Colas Construction, which is minority-owned, made an extra push beyond that goal. The company tapped relationships it has built over the years and was able to hit the 50% mark for COBID-certified firm participation.

"Colas Construction took it to a whole other level," Stroud said.