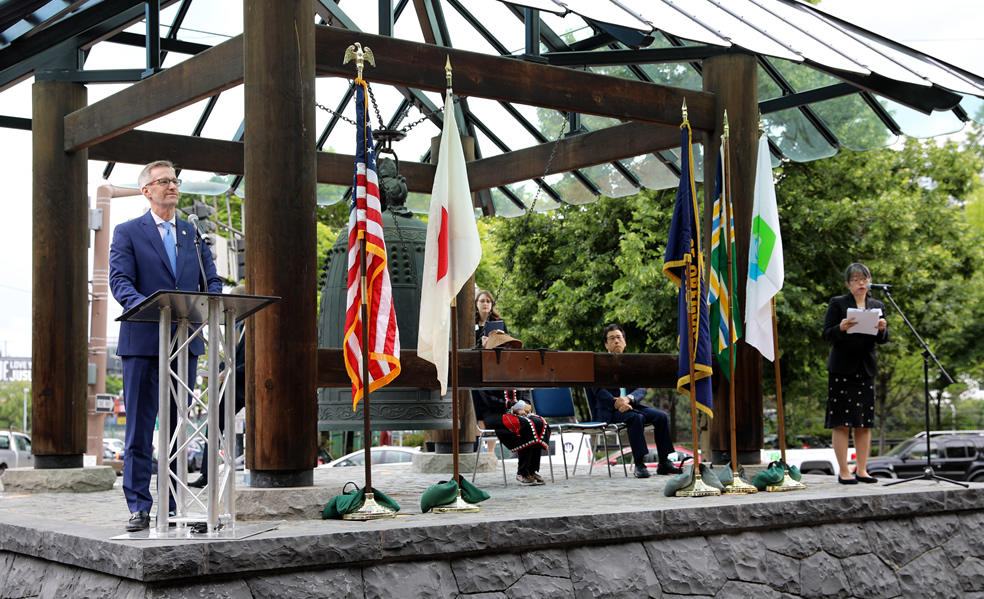 Mayor Wheeler from the City of Portland and Mayor Akimoto from Sapporo, Japan solidified their continued commitment to the Portland-Sapporo Sister City relationship by rededicating the Japanese bell gifted by business leaders in Sapporo to Portland as a 30th Anniversary gift at the Oregon Convention Center.

The streamlined and enhanced plaza at the Oregon Convention Center will ease access and entry into the center through the primary entrance. The updates to the interior spaces from the lobbies to the ballrooms will reinvigorate the center for local Portlanders as well as will improve its national competitiveness.

As part of the 60th Anniversary of the Portland-Sapporo Sister City Association, a private celebration took place at the Oregon Convention Center on June 6.

Sister city associations foster and promote cross-cultural understanding between the countries they unify. The Portland-Sapporo Sister City Association stewards the longest-running sister city relationship in Portland – and one of the oldest in the United States.

Portland and Sapporo are close to the same latitude, are both about 150 years old, with metropolitan populations of close to 2 million. Both cities enjoy beautiful settings and an appreciation of the outdoors. Both were established by pioneers – by loggers and fishermen – who capitalized on their respective region's rich natural resources.

About the Portland-Sapporo Sister City Association

Oregon Convention Center is the largest convention center in the Pacific Northwest with 255,000 square feet of contiguous exhibit space, two grand ballrooms, 52 individual meeting rooms, superior catering and concession offerings, and a full-time staff of over 120 professionals, making it the perfect venue to service events from 10 to 10,000 attendees.

The OCC became the first LEED-EB certified convention center in 2004, and then achieved LEED-EB Silver in 2008 and LEED Platinum in 2014. The facility has also been Salmon-Safe certified since 2007 from Salmon-Safe, a clean water advocacy nonprofit, for its innovative rain garden, responsible storm water management efforts and integrated pest management policy.

The OCC is owned and operated by Metro and managed through the Metropolitan  Exposition and Recreation Commission. Visit www.oregoncc.org for more information. Metro, the regional government, crosses city limits and county lines to build a resilient economy, keep nature close by and respond to a changing climate. Representing a diverse population of 1.8 million people in 25 cities and three counties, Metro’s directly elected council gives voters a voice in decisions about how the region grows and communities prosper.