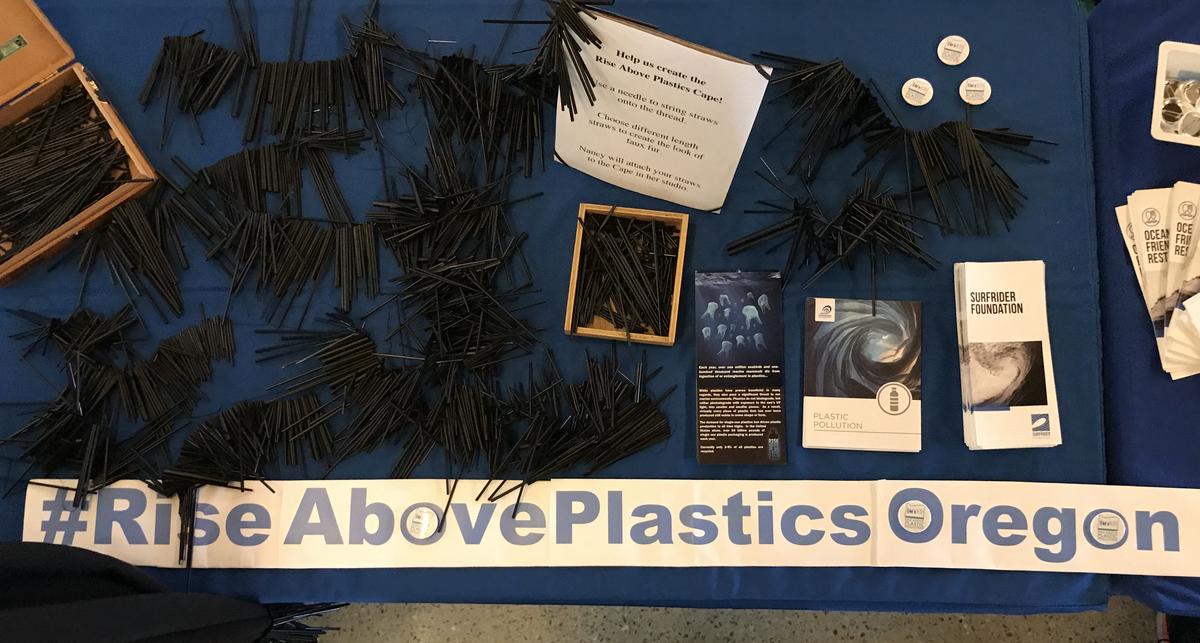 The Rise Above Plastics Cape is a “sculpture in process” currently being created by artist Nancy Judd. The project is sponsored by the Portland Chapter of the Surfrider Foundation, a nonprofit clean water advocacy group, and is supported in part by a grant from the Regional Arts & Culture Council (RACC).

Judd says the Cape will be completely covered in leftover plastic straws, creating the effect of black faux fur. The straws she is using were donated by food service businesses, including Vibrant Table Catering and Oregon Convention Center’s catering partner pacificwild. This past September, OCC and pacificwild joined the “skip the straw” movement to reduce single-use plastics at the Center and was investigating recycling and donation opportunities for the boxes of plastic straws languishing in storage.

“When organizations commit to offering straws only upon request, like at these businesses, they are left with a huge stockpile of straws,” says Judd. “Unfortunately these often end up entering the waste stream and ultimately have a devastating impact on the environment, particularly on our oceans and marine life.”

OCC’s waste reduction specialist Nancy Nordman knew of Judd’s work through their mutual affiliation with Surfrider, where Nordman led the “Ditch the Straw PDX” campaign. She immediately saw this as the best case scenario to pursue, and the OCC agreed.

“Straws can’t be recycled,” explains Nordman, “and these items are often only used for a very brief period of time before they are just thrown out. We want to reduce waste at the source. That’s a big part of the problem with single-use plastics, and to see this result in a beautiful work of art that could tell a story to thousands of people was the best outcome possible.”

Judd says she designs her fashion sculptures “to be messengers of important environmental issues,” and that the Rise Above Plastics Cape is meant to inspire people to eliminate or reduce single-use plastics like straws, cutlery, to-go containers and cup tops, and condiment packets.

The Cape sculpture is partially being created in public workshops and its debut took place at the Oregon State Capitol in conjunction with the legislature’s March 14th “Rise Above Plastics Day” observance. The three hundred students in attendance learned about the environmental dangers of plastic pollution and took the “Rise Above Plastics Pledge” to stop using single-use plastics. During the event the students were invited to thread the donated straws onto a string that Judd will be attaching to the Cape.

The Cape’s second appearance was at a showing of the film RiverBlue, hosted by the Portland Chapter of Surfrider, where Judd also participated in a panel that explored the social and environmental impacts of our clothing. The Cape’s next appearance will be on June 26th as part of OMSI After Dark.

The entire project will be completed over the remainder of the year and the finished sculpture will then go on display at OMSI in December. After that it becomes part of a yearlong solo exhibition in the Atlanta International Airport.

Please consider taking a pledge to reduce single use plastics in your life at riseaboveplasticpollution.org.

Nancy Judd is an internationally recognized artist, environmental advocate and teaching artist. She creates eco-fashion sculptures made from trash that engage people in conversations about how we live on the earth. Her distinctive, uplifting and creative approach to environmental education has touched millions of people around the world since 1998. Judd exhibits her work in high-traffic public locations such as airports and museums and creates many of her sculptures in interactive public settings. One of her pieces, Obamanos Coat, is in Smithsonian Museum’s permanent collection. Companies and organizations such as Delta Air Lines, Toyota, and the Nature Conservancy have sponsored her sculptures and exhibitions. In her work as a teaching artist, Judd provides arts integration to students in classrooms and adults in training settings. Photos and details can be seen at www.RecycleRunway.com.

In 2011-2012, the Atlanta International Airport featured 21 of Judd’s sculptures in a yearlong solo exhibition. During that time the Airport estimates that over 10 million people had the opportunity to see her work. Based on the success of Judd’s first exhibition, The Airport Art Program staff invited her back for a second yearlong exhibition of new work in February 2020.