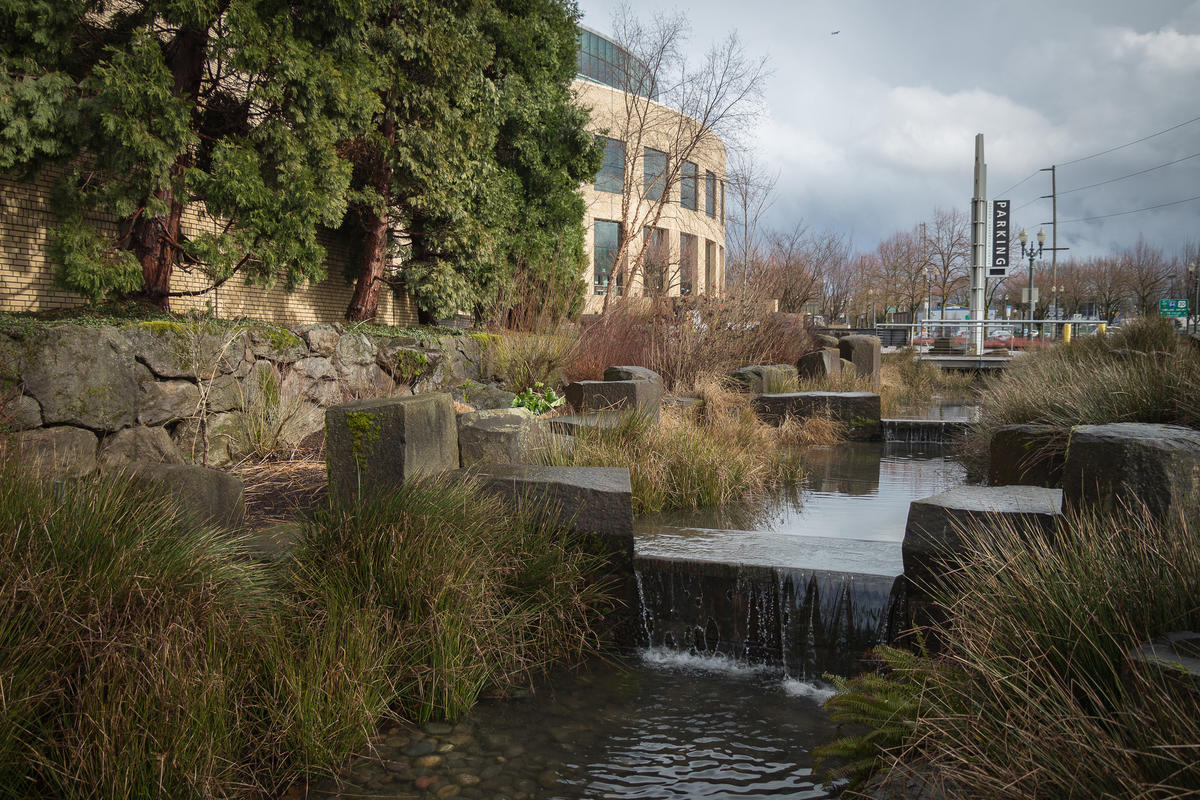 Healthy watersheds advocate Salmon-Safe has recognized the Oregon Convention Center with Salmon-Safe recertification for its commitment to reducing polluted runoff to the Willamette River.

A Portland-based nonprofit, Salmon-Safe works with public and private landowners to promote reduced water use, onsite stormwater treatment, and protection of water quality. Properties like the Oregon Convention Center are certified as Salmon-Safe for extensive efforts to halt runoff from entering streams and impacting imperiled salmon.

Dan Kent, cofounder and executive director of Salmon-Safe, said the convention center stands out for its aggressive goal-setting and comprehensive approach.

“OCC is consistently motivated to implement the most ecologically responsible solutions for its site,” Kent said. “And being a stone’s throw from the Willamette, actions on their site can have a profound impact on the river.”

Matt Uchtman, the convention center’s director of operations, said Salmon-Safe’s rigorous guidelines give the center the opportunity to set industry standards for sustainability.

“Working with Salmon-Safe helps us to look at the whole picture,” Uchtman said. “What we have is a checks and balances relationship that let’s us know we’re doing the right thing and that our contractors are living up to the expectations we’ve set forth.”

For a facility the area of 10 city blocks, the convention center contracts landscaping services for grounds keeping. With help from Salmon-Safe’s guidelines, Uchtman works directly with landscapers to ensure the property is maintained with least-toxic chemicals. Quarterly soil testing reduces the use of fertilizers, and if a certain product is required, Uchtman contacts Salmon-Safe for a list of alternatives.

In 2003, the landscaping along the building’s south side underwent a transformation into a 318-foot rain garden. Water from 5.5 acres of the convention center’s roof is channeled into pools of varying height along the garden, where plants tease out contaminates and debris.

But the convention center’s new outdoor events space was perhaps most impressive to Salmon-Safe.

Constructed with pervious surfaces, native plantings and two bioswales, rainwater travels throughout the plaza, is cooled and filtered before moving to storm sewers. And thanks to the convention center’s stringent tracking of water use, the addition of the plaza has not raised its overall water consumption since its first certification.

An upcoming remodel of the center’s north plaza has the same goal of maintaining, or even decreasing, water usage levels, while simultaneously mitigating stormwater runoff.

Along with requiring Uchtman’s staff to log water and chemical use, Kent says the real test of sustainability comes from an onsite evaluation. Every five years, during the recertification process, an independent Salmon-Safe science team in the fields of salmon health, pest management and stormwater treatment tour the site.

Pleased with the strides the convention center is making in its mission for sustainability, Uchtman is already looking ahead. The center has already conducted a study on the feasibility of the installation of a green wall that would treat stormwater on the north side of property.

Those plans could include a storage component, as well as bioswales and a rain garden expansion.

“We’re definitely more focused and aware of the impacts that we can have as a business,” Uchtman said. “The difference we can make by doing small things everywhere demonstrates our commitment to overall sustainability.”

The Oregon Convention Center was one of the first urban sites and the first convention center ever to receive Salmon-Safe certification in 2007.