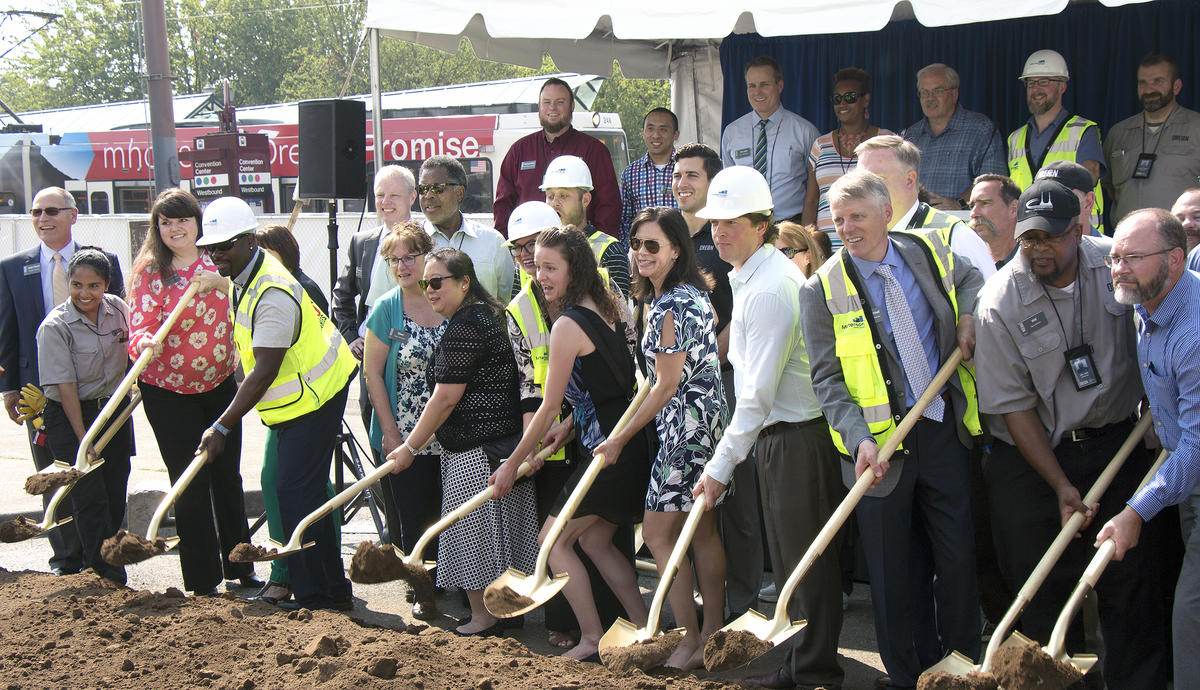 Portland dignitaries and officials gathered in the city’s Lloyd District today to kick off construction of the new $224 million Hyatt Regency Portland at the Oregon Convention Center. The 600-room hotel is expected to draw dozens of large events and conventions annually, bringing thousands of new visitors to the region and shining a spotlight on the Oregon Convention Center’s role as an economic engine for Portland and the surrounding region.

The Hyatt Regency brand experience is designed around one objective: to connect today’s travelers to who and what matters most to them. Located north of the existing Oregon Convention Center, the 14-story Hyatt Regency Portland will include 32,000 square feet of meeting venues, as well as a lobby, bar, restaurant, gym and gathering areas for guests to relax, meet, engage and recharge. The new hotel will also further solidify the Lloyd District’s emerging identity as a pioneer of new strategies for urban sustainability and transportation.

“One of Portland’s greatest strengths is the city’s hospitality,” explains Jeff Miller, president and CEO of Travel Portland. “From travel and tourism to food and beverage, our people know how to offer one-of-a-kind and inclusive experiences. Hyatt Regency Portland at the Oregon Convention Center will present us with more opportunities to show the world what a vibrant, progressive and welcoming city Portland is.”

According to a Metro survey, 79 percent of national meeting planners said they were more likely to book events at the Oregon Convention Center if there was an amenity-rich hotel next door.

“Meeting planners are genuinely excited about the new Hyatt Regency Portland, and are already asking us when they can begin booking rooms,” says Matt Pizzuti, deputy director of the Oregon Convention Center. “Groups that viewed Portland as an attractive destination but just couldn’t manage the logistics of placing a large number of attendees all over the city sometimes opted for other venues, mainly because they offered the convenience of a large, upscale hotel. We know having the Hyatt directly across the street will help make the convention center an optimal choice.”

Not only will the hotel provide quick access to the convention center, it will also be located along a bus line, streetcar line, MAX light rail line and next to a bike-share station for easy commuting to downtown Portland, the central eastside and Portland International Airport (PDX). Hotel guests will benefit from the ongoing revitalization of the surrounding Lloyd District, which is bringing more public spaces, sidewalks, storefronts and dining options to the neighborhood. Lloyd Center, Oregon’s largest shopping mall, is nearing completion of a two-year remodel, adding eight to 10 new full-service restaurants to a mix of retail spaces.

“We have been looking forward to Hyatt Regency Portland at the Oregon Convention Center for several years. The hotel is expected to attract approximately 10 new conventions to Portland each year, increasing overall convention-related visitor spending to nearly $900 million dollars per year,” explains Metro Visitor Venues General Manager Scott Cruickshank. “We are thrilled that this hotel will help Portland attract many more visitors to our wonderful city to see all that we have to offer.”

In addition to creating jobs, the hotel is expected to have a huge impact on Portland’s economy. Convention business is projected to grow 33 percent once the hotel opens in winter 2019. Portland’s continued emergence as a travel and convention destination has already spurred a hotel boom, with 3,000 new rooms in the city’s pipeline between now and the end of 2019. The convention center hotel’s opening is expected to boost tourism spending in the region by $120 million annually, while generating $10 million in new tax revenue each year, according to Metro. The Portland metropolitan area can also expect total convention-related spending to approach more than $1 billion annually.

“We are excited to be here, alongside our partners, celebrating the groundbreaking of Hyatt Regency Portland at the Oregon Convention Center,” says Jordan Meisner, senior vice president of field operations, Hyatt. “The hotel will be built to benefit the local community who work and live here, the 8 million people who visit Portland annually and the hundreds of individuals the hotel will employ.”

Mortenson serves as project developer and design-builder, and an affiliate of Hyatt serves as the owner and operator. ESG Architects designed the hotel.

The Hyatt Regency brand prides itself on connecting travelers to who and what matters most to them. More than 175 conveniently located Hyatt Regency urban and resort locations in over 30 countries around the world serve as the go-to gathering space for every occasion — from efficient business meetings to memorable family vacations. The brand offers a one-stop experience that puts everything guests need right at their fingertips. Hyatt Regency hotels and resorts offer a full range of services and amenities, including the space to work, engage or relax; notable culinary experiences; technology-enabled ways to collaborate; and expert event planners who can take care of every detail. For more information, please visit hyattregency.com. Follow @HyattRegency on Facebook, Twitter and Instagram, and tag photos with #AtHyattRegency.

Hyatt Hotels Corporation, headquartered in Chicago, is a leading global hospitality company with a portfolio of 13 premier brands. As of March 31, 2017, the Company’s portfolio included 708 properties in 56 countries. The Company’s purpose to care for people so they can be their best informs its business decisions and growth strategy and is intended to create value for shareholders, build relationships with guests and attract the best colleagues in the industry. The Company’s subsidiaries develop, own, operate, manage, franchise, license or provide services to hotels, resorts, branded residences and vacation ownership properties, including under the Park Hyatt®, Miraval®, Grand Hyatt®, Hyatt Regency®, Hyatt®, Andaz®, Hyatt Centric®, The Unbound Collection by Hyatt™, Hyatt Place®, Hyatt House®, Hyatt Ziva™, Hyatt Zilara™ and Hyatt Residence Club® brand names and have locations on six continents. For more information, please visit www.hyatt.com.

Metro brings people together to shape the future of greater Portland and provides places, services and tools that work best at a regional scale. Led by an elected council, this unique government gives Oregonians a voice in parks and nature, land and transportation, garbage and recycling, and arts and event venues.

Travel Portland is the official destination marketing organization for the city of Portland, Oregon. Its mission is to strengthen the local economy by marketing the Greater Portland region as a preferred destination for meetings, conventions and leisure travel. For more information on Travel Portland, visit www.TravelPortland.com.