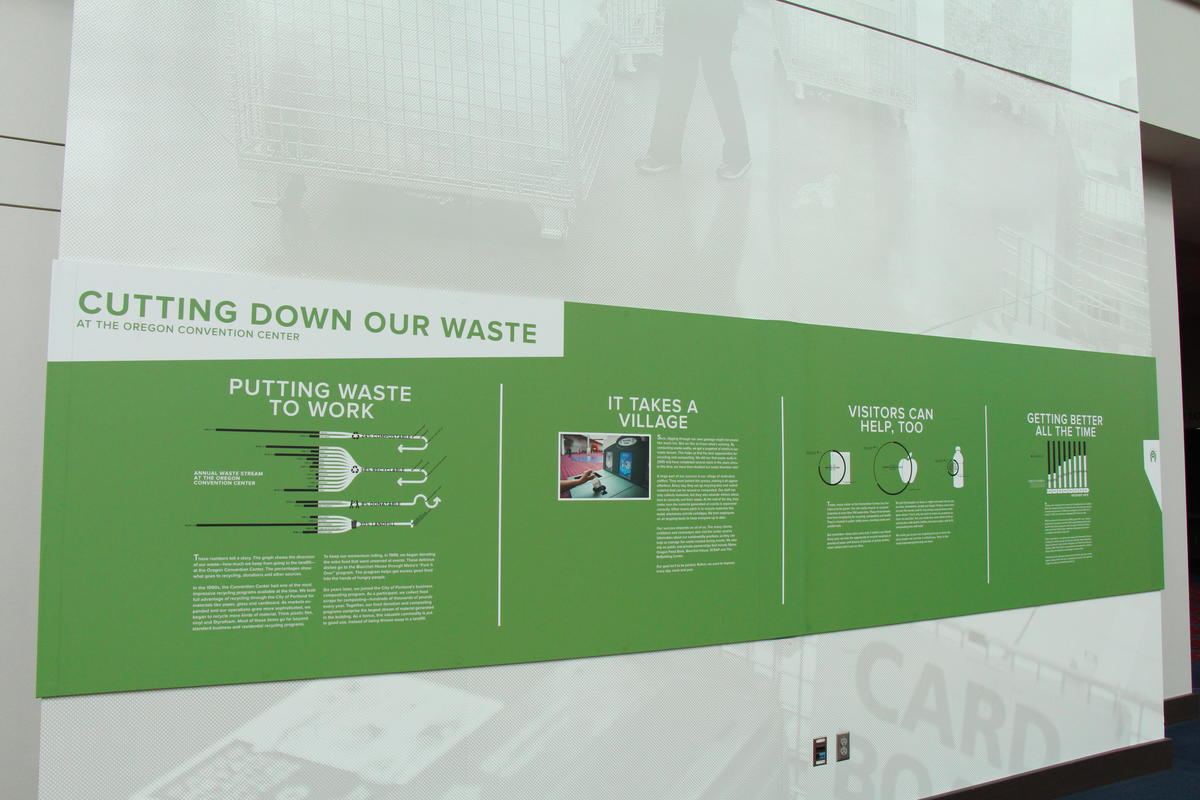 The Oregon Convention Center has a reputation for being one of the most eco-friendly convention centers in the U.S. – and it has the LEED Platinum certification to back that reputation. Now, the OCC is taking steps to run even more sustainable conventions and send less waste to the landfill after each event held in the center.

The convention center's staff has created a new waste diversion policy requiring all conference organizers to put down a deposit which will be refunded in its entirety if the client refrains from bringing in any prohibited items and makes sure to recycle or take away all materials they bring in.

The new policy is being explained to clients now, but won't go into effect until January, according to convention center officials.

"We view this policy as a differentiator in a positive way," said Matt Pizzuti, deputy director of the convention center. "It's a first-of-its-kind of policy in the nation and the target is getting the shows to be a partner. At the end of the day, for us to have success, we want every single partner to get their money back."

Pizzuti said the convention center staff is working on creating handouts and videos to assist conference planners with educating their exhibitors and staff.

"We could have gone to a recycle fee but that doesn't engage anybody or educate anybody," Pizzuti said.  "It's just another thing you have to pay for."

Cindy Wallace, assistant director of sales at the convention center, said she views the new policy as the next step in being a green facility.

"We had plateaued," she said. "We are a trailblazer in the way we are asking people to change the way they are doing business. We're asking them to be smarter. Hopefully, they will implement this process across their conventions."

Wallace said the convention center diverted 67 percent of its waste away from landfills and to recycling or reuse in 2014.

"We are aiming for an 80 percent diversion rate with this new policy," she said.

April Dyas is the Portland area manager of Triumph Expo & Events, a trade show general services contractor. She said her company works in the convention center about 20 times each year. Dyas said she views the new policy as simply solidifying what is already in place at the convention center, at least informally.

"Already, your event here is sustainable whether or not you want it to be," Dyas said. "The new policy is about educating the customers about what they can do and how they can be more sustainable during their time in the building. Basically, what this policy is asking is for everyone to be good citizens."

Dyas, whose company sets up conventions and provides everything from draping and carpet to signage, said the policy will change the way Triumph does business slightly.

"We already recycle and reuse carpet from conventions and print with water-based inks on sustainable materials," she said. "We will include sustainability information in our manuals for exhibitors and we will make the information more specific as January 2016 approaches."

Mike Smith, vice president of convention sales at Travel Portland, a destination marketing organization that partners with the convention center, said he was a little wary when he first heard of the new policy.

"I had some trepidations. I thought, 'Oh boy, here we go!'" Smith said. "But I think organizations look at it for what it is, it's just an attempt by the Oregon Convention Center to be as green as they possibly can and asking their clients to help with that."

Smith said the policy differentiates Portland as being serious about being sustainable and green.

"The nice thing about this is that while there is upfront money required by the organization, they get that back if they don't leave anything behind. No harm, no foul," he said.

Matt Uchtman, director of operations for the convention center, said the hope is that other cities will follow Portland's lead.

"Each city is different because different cities have different regulations, things they can and can't recycle and compost. But the overall premise is something they can take and use," he said.

DWA Trade Show & Exposition Services, another trade show general service contractor that does business with the convention center, will be making "sustainability cheat sheets" for the exhibitors at conferences they work on, said Patti Beyer, vice president of sales.

"I think the policy is absolutely great," she said. "And I think we need to work really hard to get especially the exhibitors educated about what not to bring. The sooner we start the better off we'll be."