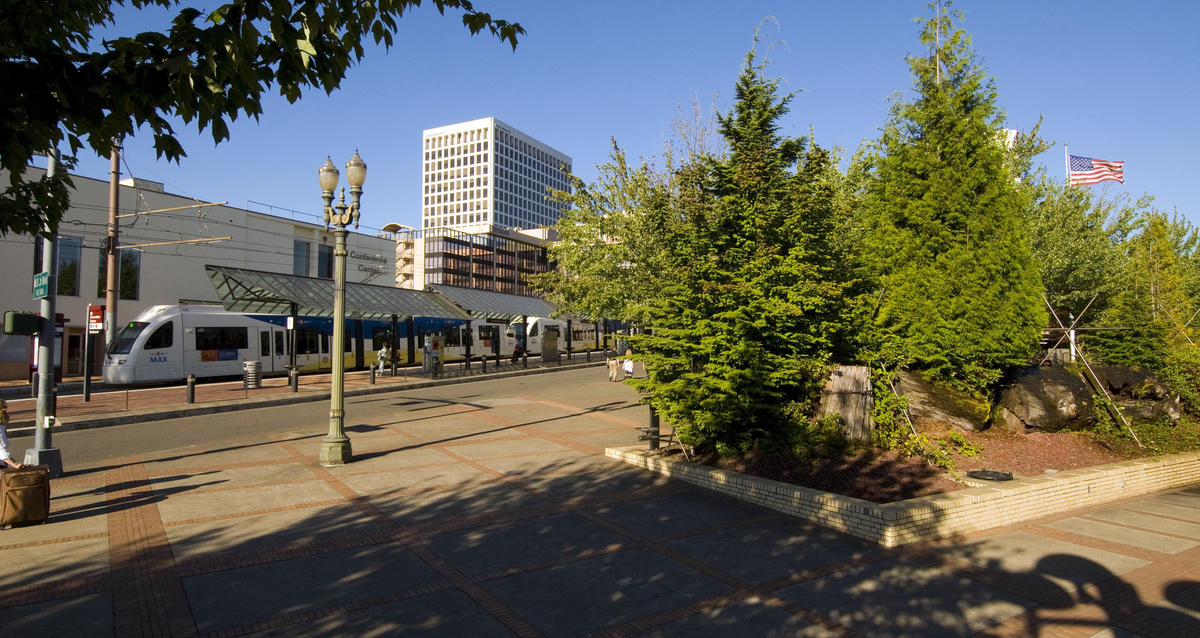 Oregon Convention Center officials plan to renovate the center’s northeast plaza, at the corner of Martin Luther King Jr. Blvd. and Holladay Street, starting in 2018. The renovation project aims to give the grounds a fresh look by redesigning the plaza, and help visitors – particularly those staying at the soon-to-be-constructed Hyatt Regency Portland – navigate the area.

“We would really like the facility to be renovated and refreshed in anticipation of the Hyatt Hotel opening in 2019,” said Karol Collymore, the communications and policy development manager for Metro’s visitor venues. “It’d be really great to have the renovation of the plaza be more inviting to the community and other parts of the building to reflect a more modern look.”

The $35 million renovation project also includes the addition of canopies at the two main convention center entrances, as well as a number of interior improvements.

Outside, both the Dr. Martin Luther King, Jr. Memorial Sculpture and the Bell of Sisterhood, a gift from the Republic of Korea, will remain in place during and after the remodeling. The Friendship Bell, given to Portland as a gift from Japan, will potentially be moved to a Southeast corner of the site. The convention center is actively working with the Regional Arts and Culture Council to ensure art pieces throughout the grounds are not impacted negatively.

“There’s a real opportunity to repurpose that plaza, so that it has programmable use, so we can have activities like concerts, receptions, or other kinds of convention events,” said Brent Shelby, the project manager for the renovation. “It’s going to be a far more welcoming experience.”

Though the convention center renovations and the addition of the Hyatt Regency hotel are two separate projects, their opening dates are meant to coincide.

Construction on the 600-room Hyatt hotel is expected to create 2,000 jobs with construction starting this summer. With the addition of a convention center hotel, Metro and the center are expecting to attract a wide variety of national conventions and lifestyle events to Portland.

For convention center project construction, the Metro Council approved an alternative procurement method, meaning that general contractors will have the chance to submit proposals rather than go through a bidding process for contracting. This was done in order to provide opportunities for a variety of firms and encourage diverse partnerships on a larger scale.

More recently, Metro used the same procurement process when it was carrying out construction projects that were part of the Oregon Zoo bond program.

“For Metro, economic viability is important and our economy only thrives if everybody has access to success,” said Collymore. “We want to make sure we’re saying ‘we see you, want you to have access to this, we want you to participate in the robust economic opportunities this convention center and hotel have to offer.’”

Specifically, Metro wants to strongly encourage partnerships between large general contractors and smaller, certified firms that may not have had the capacity to take on the larger project alone.

“We rarely have this kind of opportunity to really provide resources to construction trades of this scale,” Shelby said. “We want to be conveners and we want other public agencies to really help support diversity in workforces.”

During construction, the convention center is set to remain open and fully operational.